Escape Room is exactly what it says on the tin. It’s a movie about escaping from elaborate traps, taking cues from Saw to deliver some imaginatively themed rooms.

So without further ado, we present 10 movies to check out when you’ve finished watching Escape Room.

Who would have thought that 2004’s Saw would go on to create such International acclaim. With multiple sequels, spin-offs and even a theme park ride in England, Saw is one of those cultural zeitgeists that absolutely transformed the horror world.

For those unaware, the original saw movie begins with an intriguing hook and just becomes more and more mysterious as the film progresses.

Two strangers awaken in a room with no knowledge of how they got there. However, they soon discover that they’re pawns in a deadly game perpetrated by a notorious killer known as Jigsaw. Only, there’s a catch.

You see, Jigsaw never actually kills anyone. He has his victims kill themselves in increasingly gnarly and gruesome ways. All of this builds up to the mother of all twists at the end, complete with a musical sting that’ll leave you with goosebumps.

Saw is a must-watch for horror fans.

With no knowledge of how they got there and with no food or water at hand, the group are forced to work together. The only trouble is, most rooms hold deadly traps that they need to try and evade.

What’s particularly interesting here is the personality shift for each character. The stark differences in personality, as things begin to grow more desperate, leads to some very shocking and tense sequences late on. The Game is a fascinating, psychologically charged movie that makes you question just what’s real and what’s not.

The story here revolves around Nicholas Van Orton, a very wealthy San Francisco banker but a loner who spends his birthdays on his own. On his 48th birthday, Nicholas’ long-missing brother Conrad suddenly returns and gives Nicholas a bizarre birthday present.

This comes in the form of a card granting him entry to unusual entertainment provided by something called Consumer Recreation Services (CRS). Giving in to curiosity, Nicholas visits CRS and finds himself caught in a game like none other.

Well written and full of some shocking twists, this is one game you should absolutely take some time to play.

Based on a true story, 127 Hours is another gripping survival movie. It’s also a film that teaches everyone, everywhere to let your loved ones know where you are at all times!

For those unaware, 127 Hours centers on an adventurer called Aron Ralston. One day, he ventures out deep into the heart of Moab, Utah on a canyoneering trip. Unfortunately, disaster strikes and Aron becomes trapped under a boulder.

Panic soon turns to harsh realization. No one is coming to save him and Aron only has minimal time left to plot an escape from his impossible situation.

Gripping and absolutely intense, 127 Hours is a great movie.

Claustrophobic and tense, Buried is a well shot and gripping thriller.

The story here follows a US truck driver working in Iraq called Paul. After an attack by an enemy group, Paul awakens to find he’s buried alive inside a coffin.

With only a lighter and a cell phone for company, Paul is pushed to the absolute limit to try and escape this claustrophobic hell.

If you haven’t seen it already, Buried is absolutely worth your time. 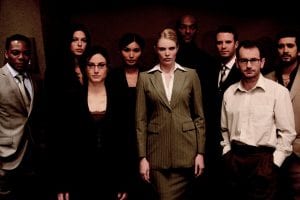 On the surface, Exam looks like just another movie about a group of people trapped in a room together. However, this clever little Indie manages to step away from conventions to deliver a really well paced thriller.

The premise here sees eight candidates locked together in an exam room. When they all sit down to take the test however, it soon becomes apparent that something else is going on.

The group are forced to work together, determined to pass the test they’ve been given and bag this highly desirable corporate job.

With a lovely twist at the end and some great drama along the way, Exam is a nicely written psychologically charged thriller.

One of the more polarizing entries on this list, Vile is another movie that cashed-in on the Saw craze back in 2011 to produce a similarly themed story.

The plot here revolves around four friends who are kidnapped by a madman and locked in a house with six other people. Each of the captives are forced to endure life-threatening torture to fill a device attached to their heads. If they fail to do so, they’ll be trapped inside forever.

Compared to Saw, Vile is rather tame and -dare we say it – not overtly vile. However, the movie definitely succeeds in delivering a bloody and violent trip. With a similar premise to Escape Room, this should please horror fans.

Set in an abandoned asylum, this updated remake of the 1950’s movie certainly has some nightmare fuel attached to it. The premise is simple, the ghosts are creepy and the first-half of this one builds everything up beautifully. It’s just a shame that the second half devolves into silliness.

The set-up is very similar to Escape Room though, and revolves around a group of teenagers who are each offered $1 million to spend the night in a haunted house. Simple right? Well, things soon turn from bad to worse when the ghosts come out to play.

Although a little generic and with very little characterisation for the main characters, the film’s first half alone makes it worth checking out.

The Belko Experiment is basically Battle Royale in an office. While the film doesn’t necessarily do anything outstanding or different to others in this field, it is a fun little popcorn flick to pass the time.

The movie plays out as a twisted social experiment, pitting 80 different Americans against one another as they’re locked in their high-rise corporate office in Colombia. From here, they’re forced to compete in a game of kill or be killed.

Although a bit generic, the movie does have some nice set pieces and enough violence that fans of the genre should enjoy.

Stephen King’s psychological thriller, Gerald’s Game, is the perfect example of how to tell a simple story well.

Trying to spice up their marriage, Jessie is handcuffed to the bed by her husband Gerald. What starts as a kinky game quickly turns into a nightmare. Gerald suffers from a heart attack and Jessie is left all alone.

Still chained to the bed, a terror filled ordeal transpires as Jessie begins hallucinating and reliving painful memories in her past whilst struggling to break free of her shackles.

The movie perfectly emulates that same sense of dread and despair movies like 127 Hours has in abundance, delivering a psychologically charged treat.

So there we have it, our 10 Movie picks to keep you busy after watching Escape Room.